Edanians are a race of eternally young, long-lived progenitor species of Humanity and Kilominitics who often noted for their common love for nature. They often have dark-green to light green hair, green eyes, and skin that's often have a green tent to it and predominately fair in complexion. They are considered peaceful, gentle, and benevolent people who are more into the worship of nature and all life in the universe. They are native to the planet Eden. It is also known that they are responsible for the creation of the Human race and eventually joined the Alliance of Nations when they fought against the Axis of Empires. Their empire was preceded by the Zelius who passed down their power to the Edanians some 290 Centrillion years ago

Around some point in 290 Centrillion B.N.E., the Edanian soon developed means of interstellar travel and expanded their dominion across their native solar system and to others, explorers discovered the planet they found was named Wufenn’l, an outpost belonging to a reptilian-like species known as the Zelius and met them in their Homeworld Zoiliu with the technology far more advance than anything they could ever imagine. Discovered they not only travel between distant galaxies, but another universe.

The two became close allies over time and shared knowledge to help one another, but the majority of Edanian still retained their love of nature by their cultural ancestry but used the knew knowledge to expand the Great Empire of Eden, encountering new worlds, civilizations and make relations to others.

Creation of Humanity and the Kilominitics[]

Fall of the Empire[]

Although the last decades of the Empire were close to total collapse, those that survived were scattered into small groups, fled to distant colonies in several galaxies or universes to escape the extinction of their civilization and rebuilt in hopes of restoring to its former glory.

With the fall of one of the greatest civilizations to ever exist crumple, the remnants of the fallen Edanians scattered across the various universes or the uncharted regions of their own from their enemies. Edan, no longer safe to return they built ark ships to carry whats left of their people to avoid capture and enslavement from any hostile forces that seek to exploid their abilities or exterminate the Edanians. Cutting all communications with each other after leaving their universe and end up elsewhere, some would choose to live among humans to blend in or seek sanctuary. However, not all being welcomed with the emergance of the First Human Republic to make their emergence. The rest remain in hiding, hoping one day to return to rebuild their civilization once more or search for their people to settle on a new home.

The Edanians worship a pagan religion based on the worshipping of nature as a source of their faith. They perform certain rituals in order to please them and gain understanding from them. Some rituals required the Edanians to practice in their bare bodies. However, due to their religious beliefs, they feel unashamed and comfortable with their practices. It is led by a High Priest, who has the power to conduct rituals and the sacrificing of farm animals in order to keep their traditions from dying.

Their physical appearance is extremely similar to that of a human's (with facial features being reminiscent towards an admixture of Greek, Jewish, and Irish features), but are inherited with eternal youth and usually have natural light to dark green hair and green eyes, although hues of blue and cyan are known to occur. They usually have a lifespan of 500 years and their hair color tends to change into a pure white as they reach into an elderly state, regardless of the fact that they do not physically appear as such. They are usually light-skinned, with a slight green tent to it, and appear to have "child-like" eyes. Typically the species have a human range in terms of heights, with the average heights ranging from 1.6 Meters (5'5 Feet) to 1.9 Meters (6'5 Feet) for females and 1.5 Meters (5 Feet) to 1.8 Meters (6 Feet) for males, interestingly, Edanians typically had females be the taller, and stronger of the sexes, some to which their created offshoots, Kilominitics and Humans, do not share with their parent species. 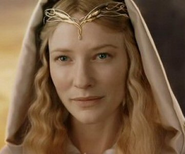