OOM-9 was a B1 battle droid created by Baktoid Combat Automata prior to the war. OOM-9 was selected to serve as a command battle droid for the invasion, leading Trade Federation forces into battle and achieving great success during the early stages of the campaign. Under OOM-9, Trade Federation troops defeated the forces of the Naboo at the First Battle of Harte Secur and the First Battle of Spinnaker, before capturing the capital city of Theed. With news of a primitive species residing in the planet's swamps—the Gungans—reaching the Trade Federation, OOM-9 was charged with hunting them down, but had limited success.

Originally a standard B1 battle droid,[4] OOM-9 was created by Baktoid Combat Automata[1] for the Trade Federation some time prior to 32 BBY to serve in their Droid Army under the Neimoidian Viceroy Nute Gunray, along with his senior staff Rune Haako and Lott Dod.[4] Since the B1 droids did not have a standard alphanumeric series designation, the name "OOM-9" was selected for the unit from a shortened version of the unique identification code assigned to the battle droid.

While the battle of Naboo ended in a trade federation defeat OOM-9 was deactivated like many of his breathern once their control ship was destroyed. However he was later reactivted by Bucket of Renegade squadron when Renegade squqdron went on a mission to Naboo to hunt down a Gojira lifeform that was somehow transported to the system. OOM-9 and his reprogammed droid army aided Renegade Squadron in the hunt in which the Gojira lifeform turned out to be Zilla. He survived the battle but was cricticaly damaged, fortunatly his consiuous was transferred into a new B1 battle dorid body in which the droid gained his independaence and officaly joined Renegade Squadron under the callsign "Lucky Nine". 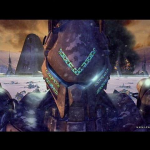