The Retribution of Scyrah, also known as the Retribution, the High Elf Separatist, the Elven New Order, the elven pro-secessionists, colloquially as Separatists Elves, nicknamed the Elven Sepies, lesser known as the Separatists of Quel'Thalas and after First Multiverse war known as the Scyrah Republic, was a faction found in Immoren. Not long ago the Retribution of Scyrah was an outlawed fringe organization of zealous and violent elven fanatics. Their goal has been the eradication of human wizards and sorcerers, whom they hold responsible for the ills of their species. Until recently they have had to work in secrecy from numerous cells within Ios’ neighboring human kingdoms. Now things have changed. Their message has found a voice inside Ios and they have won new allies to their cause. They are no longer forced to hide their affiliations and have begun to organize into an army capable of waging open warfare. The Retribution is now large and influential enough to abandon secrecy at home and to become a recognized political, religious, and military power. The Retribution has gained access to a significant portion of the armed might of the nation, including hundreds of myrmidons brought by House Shyeel as well as the Dawnguard legions of House Nyarr, who are among Ios’ most formidable warriors. While their size and the scope of their military capability has increased almost a hundredfold from what it was, their army remains relatively small compared to those of the nations they plan to strike. They are also competing for resources inside Ios with the force assigned to defend the nation’s borders. As of current issues, Scyrah joins the Coalition of Independent States and recognized as a separatist faction.The Scryah Republic joins the Imperialist alliance during the coalition civil war and the Nationalist Alliance during the unity era. 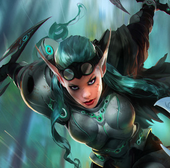 The most-well known and a seductive Scyranian war heroine, Elara

A Close Up of the Third Chamber Soldier 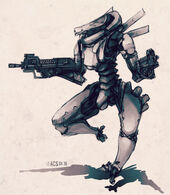 A XR8 Griffon Lightweight Battle Mech
Add a photo to this gallery
Retrieved from "https://greatmultiverse.fandom.com/wiki/Retribution_of_Scyrah?oldid=33646"
Community content is available under CC-BY-SA unless otherwise noted.