“The Sontarans shall strike fear and terror through the Multiverse, as we take part in the greatest war that ever existed! For the glory of Sontar! Sontar-ha!”

- Bangui The Annihilator before his first battle against the Turian forces.

The Sontarans were a race of belligerent and militaristic clones from the planet Sontar in the Doon'kin Universe, created by the Kaveetch. They waged eternal war throughout Mutter's Spiral against the Rutan Host, though they made no effort to change this nor did they want peace.

When they discovered the of the Multiverse and the events of the First Multiverse War, the Sontarans were eager to take part of what they saw as the greatest war that ever existed since the Last Great Time War and eventually joined the Coalition of Independent States when they gained the ability to travel between universes, sending scouting forces while remain in their own to continue the war against the Rutans.

Leaning much of the greater enemies known as the Empire of the Combine Race as the founders of the Axis of Empires, the Sontarans launched scouting parties to the closes Combine outposts and controlled worlds to study their tactics and abilities to prepare an attack while sharing the information with the Horde allies

The Sontarans were humanoids with large, bulbous heads and short, stocky bodies. They had grey-brown skin and deep-set features. Sontarans generally had three digits on each hand (two fingers and a thumb). Some Sontarans also had vestigial hair, generally in the form of beards, which grew white with age. Sontaran blood was green. The Sontarans reproduced by cloning, meaning each Sontaran was nearly identical to each other. There were some instances in variation, such as the number of fingers or skin colour. The mass cloning techniques they possessed allowed their hatcheries to produce up to 1,000,000 Sontarans in 4 minutes. All appeared roughly the same age, with the exception of General Sontar, who appeared older. The rare Pureblood Sontaran had increased status and were higher in the hierarchy. Occasionally, genetic defects would crop up and the afflicted Sontarans would be sent to work in menial labour.

Early Sontarans believed in the Furies. A school of Sontaran painters specialised in apocalyptic landscapes. They were executed for artistic tendencies.

Sontarans were known to enjoy beverages, including a particularly potent Sontaran alcohol known as Vragg. 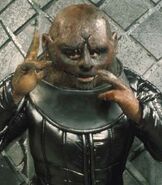 Linx
Add a photo to this gallery

Retrieved from "https://greatmultiverse.fandom.com/wiki/Sontaran?oldid=38897"
Community content is available under CC-BY-SA unless otherwise noted.