This section is all about the weapons of the New Valkion Federation and its predecessor, the Alliance to Restore Arborea during the Multiverse Wars, originally their arsenal are medieval and magical weapons and mounts, but when the Invasion of Arborea and the Great Rebellion occurred here, all of their fantasy weapons are quickly replaced by Modern weapons that was used by Allied members such as Felreden and the Earth Alliance.

M192 Piledriver, used by the Amani

K-56 Pendragon, used by the Castanics

K-34 Mjolnir, adopted from the K-Volt, the AONA PEPS and the Tekla-made weapons

AKM-2000 Serikov rifle, built from the AKs during the Arborean Rebellion

M13 SCR AMR, used by the Barakas
Add a photo to this gallery

Weapons adopted from Allied members during the Great Arborean Rebellion

Type 2 Phaser, adopted from the United Federation of Planets
Add a photo to this gallery 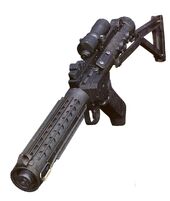 AK-12, captured from many Axis members