This section is all about the weapons and technology found in the Aoop'yujo Universe during the Multiverse Wars, originally their arsenal are medieval and magical weapons and mounts, but since the first war struck here, all of their fantasy weapons are quickly replaced by Modern weapons that was used by Allied, Axis and Horde members such as Pol America, Gil Soviet Union, the Retribution of Scyrah and others.

Nuian and Haranya Alliance produced their own weapons and vehicles 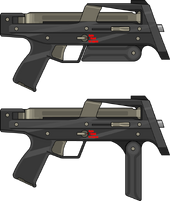 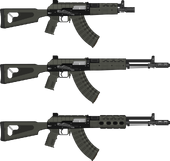 ART-184, used by the Haranis who joined the Zann Consortium

MGT-68, main LMG of the Nuians

MG-50, normally used by the Greater German Empire, later adopted by the Firrans

Nuian Bolter, reverse-engineered version of the Imperium of Man Bolter by the Nuian Alliance

MMBT-42 Leatherneck, main battle tank of the Nuian Alliance
Add a photo to this gallery
Retrieved from "https://greatmultiverse.fandom.com/wiki/Weapons_of_the_Aoop%27yujo_Universe?oldid=25267"
Community content is available under CC-BY-SA unless otherwise noted.